Our Interview with Janet Klein, the Creative Force Behind Vera Lane Studio 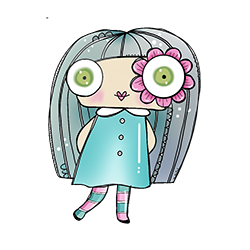 Janet Klein’s passion for and career in art began in childhood in an English Tudor home in her father’s attic art studio. A lot has happened since then. When her career as an art specialist was winding down, she started a home studio for tutoring art that she named Vera Lane Studio. This became the place where her unmistakable wide-eyed characters were born, and with them a new career as an internationally recognized illustrator and photopolymer stamps.

With the introduction of the new Esterbrook Estie Candy, we couldn’t think of a better artist to help us bring the spirit of the pen to life. Candy’s persona arrives in the form of a Janet Klein drawn character replete with her signature big eyes and wings! We’ve made her drawing into stickers to bring a little bit of Candy to all of you and we know you’ll find her just as sweet as we do.

Herewith, our conversation with Janet to introduce you to her and let her tell you more about her art and how she was inspired to partner with us on the launch of Candy.

When did you start drawing and making things with your hands?
My father introduced me to art media at a very young age. My first canvases were my bedroom walls. Growing up in New York I had the opportunity to visit many art galleries and museums. As long as I can remember creating has been embedded in my fabric. 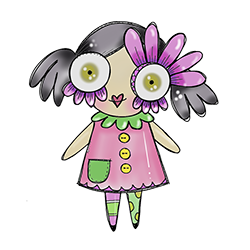 How did you develop your signature style?
My style has evolved over the years. I have always cartooned and my characters always had large eyes. When I was young, I drew old people. Now that I’m older, I draw youthful images. My Vera Lane characters began a little more edgy than they are today. I modified my designs to appeal to a wider audience.

When did you start Vera Lane Studio?
Vera Lane Studio began as a home studio for tutoring art. When I retired in 2012 (as an art specialist) I started sketching for digital stamps. I had been freelance designing stamps since 2000 and decided to create a line for myself under the name Vera Lane Studio. About four years ago, I started collaborating with the AALL&Create company in the UK and we are producing my characters in photopolymer clear stamps. Now, my characters are enjoyed by many crafters worldwide.

What inspires the stories you want to tell?
I create the characters, but I think it’s even more fun to see the stories using them created by my fans and customers. There are Vera Lane Studio characters everyone can relate to. I get told time and again that people see themselves or people they know in my little people. I’m inspired by my fans' enthusiasm and often their requests. I love people watching, and I never tire of it. I find inspiration for my characters all around.

Who are your main characters?
I wouldn’t say I have main characters. I have a few hundred by now and I certainly have my favorites. My style is very identifiable with large eyes, most often flower eyes, short bodies and large heads. 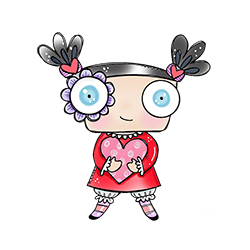 Who is your audience and why do you think they relate so much to your pieces?
Between Vera Lane Studio and AALL&Create my audience extends worldwide. Due to the fact that I have so many characters I think there are ones everyone can relate to regardless of background . From grandmothers to millennials, to very young children, and everyone in between, my characters are enjoyed by many. They are quirky, yet joyful. They make people of all ages happy. They are tongue in cheek and often offer a wink and a smile.

What are your favorite tools in your studio for making your work?
I will literally pick up anything and doodle. From pencils to fountain pens. I used to ink all my final designs, but now most are done digitally. If there is the smallest piece of paper, a blank space in a magazine or catalogue I will draw on it.

Are you a fountain pen enthusiast and if so, which pen do you most enjoy using?
I love all kinds of pens and markers and recently began collecting fountain pens. One of my design team members began sharing her pens with her posts and inspired my fountain pen addiction.
My father illustrated with Montblancs which I have inherited. For my personal taste I like a pocket pen that is posted. A smaller pen is more suited for my hand

How did you approach the project for Candy?
I was inspired by the body of the Candy pen as well as the name. I selected one of my popular characters, a quirky winged gal, and decided she’d be flying with the Esterbrook Candy fountain pen in her arms. Then I envisioned her soaring over a field of candy plants to bring the name literally into the design. Delicate butterflies surround her fashioned out of the Esterbrook logo.

What’s next for your studio?
I’ve create stencils and washi tape for AALL&Create that work beautifully with my characters. Our next venture will be ephemera. I design for Vera Lane Studio a year in advance with the exception of special requests. That leaves my year open to design and collaborate with AALL&Create.

To learn more about Vera Lane Studio, visit her shop. And make sure to check back to see the launch of CANDY later next month!