How a Pink Nib Came to Be

When Esterbrook set out to create a limited-run Estie, we wanted to make it something that hasn't been seen before. 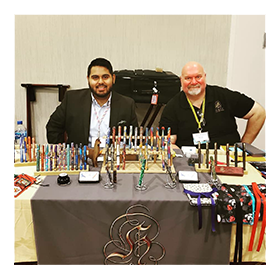 With Pink Sands, we knew it had to be a completely out-of-this-world concept and we were lucky to have Jim Hinze and his team of Hinze Pen Company as collaborators.

As you may have seen, Pink Sands has a coral-colored nib to complement the pink acrylic body and palladium trim. The technique to create this nib was honed by Hinze over years of practice and working with other artisans. Putting his knowledge to the test, we created a 50-run launch of Pink Sands. We have to say, nothing will be more Instagrammable this Winter than a pink nib pen.

Hinze began his pen-making in the early 2000's after attending a woodworking class where pen turning was on the agenda. Since then, he graduated from kit based pens to fully custom, hand made pens and has become a family business. Alongside Jim, there is Elyce, Francisco, Ray, Rachel, and Natalie. All have a similar passion for design and craftsmanship as Jim. And it was this passion for craftsmanship and technical innovation (besides woodworking, Hinze has built a career in IT and program development) that has led Hinze to create a name for itself in the pen industry for their nibs.

Using a specialized nanoceramic coating technique applied with an electroplating process (yes, it gets pretty science-y over at Hinze Pen Company!), Jim and his crew has built an entirely new way to style one's pen.

What we're calling the Chroma line with Pink Sands at the forefront, we hope to continue working with Hinze Pen Company throughout the years for more limited releases in the future.

Be sure to see Jim's own work via his website here.